The Bank of Newport is a small bank branch that serves the southeastern area of New England. They were established in 1819 and have only 12 bank locations, mostly in Rhode Island. Their challenge over the past years has been to secure more local customers to their community bank by recruiting them away from the large bank branches that have permeated the area. The Bank of Newport wanted an economical promotional gift because they do not have the vast budget of their competitors. They also wanted the product to be useful and endearing to the residents of the area, demonstrating to them that they actually care about the community. The bank has always prided itself on their community efforts and help sponsor numerous events throughout the year. The gift was to be given away at the Newport Bank booth at several of these community festivals during the spring/summer months.

The decision was made that Newport needed a product with resale value and that the product had to prove to the patrons of these neighborhood events that Newport cared about them. The mint box  that was chosen contains 20-25 peppermints, is recloseable, and is Advertising Mint/Candy/Gum Box with Signature Peppermintsfully customizable on all 5 sides of the box. The mint box offers more advertising space than most products and is printed with 4-color process printed. A box of mints like this is often purchased in the store for over $1.

The mint box promotion helped to further establish the Bank of Newport as the preeminent bank for the people of southeastern New England. It was distributed at the Newport booths at several sponsored events through the spring and summer. The advertising box was useful and compact enough to be placed in purses and pockets. This way the potential customer would remember the company name and logo days after the event. After the promotion, the Bank of Newport received many compliments on the product and requests for more by the community. More importantly, the bank saw a 10% increase of new customers in the fall. Newport was so happy with the product that they continue to use the promo product team for future promotions. 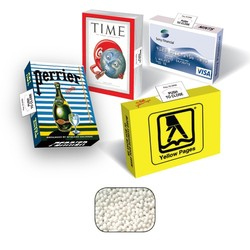