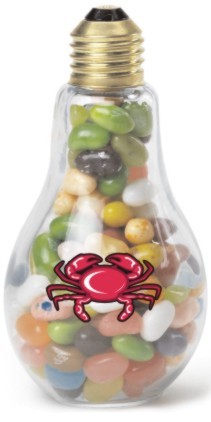 This month's case study is a bit different than ever before. Instead of exploring something that worked, we're going to look at a promotional effort that, in my opinion, was a big fail.

First of all, let me clearly state that, in order to protect the guilty, all company name, company locations and logo have been changed. Otherwise, the facts of the story and the item itself are all as I (Rama Beerfas, Chief Solutions Specialist of Lev Promotions) personally experienced them.

I was at a trade show recently as an attendee. One of the exhibitors (let's call them Impossible Aspirations) based out of Maryland, created a logo where all the "o's" in the company

name were the crab graphic you see on the light bulb at the right. (The crab represented their corporate headquarters being in Maryland.) Their display theme was "fresh ideas" and they were also prominently announcing the opening of a new location in Denver, CO.

Challenge: To achieve brand recognition within their industry at a prominent industry trade show in Las Vegas.

Solution: Give out light-bulb shaped containers filled with jelly beans to play back to the "fresh ideas" theme. I estimate they spent about $7,000 based on catalog pricing for this item for 1,000 units at $6/unit plus setup, sales tax and shipping costs.

Problems with the solution:

Results: I took an informal poll of six people (that happens to be 1% of the number of people statistically expected to visit their booth based on the number of registered attendees). I either saw these people holding the light bulb or they were people who know what I do and asked what I thought of the item as a promotional product. I asked them, "Who was giving those out?" or "Do you remember who gave it to you?

(By the way, the guy responsible for this company's promotion told me what a "success" it was because "everyone wants one" and "our logo is everywhere.")

It turns out that the jelly-filled light bulb managed to deliver one, final disappointment:

I gave it to my 15-year-old daughter because she likes jelly beans (as long as they're not the black licorice ones). She removed the shrink wrap, unscrewed the top, turned it upside down down to get her goodies and watch what happened:

Moral of the story: When you're ready to use promotional products effectively, work with a promotional product consultant (like Lev Promotions) who will ask questions and make imprint recommendations. Listen to their advice and you'll likely get the results you want.