One of the largest international hot sauce suppliers sells its products through a network of major distributors. The company attends approximately fifteen trade shows annually, focusing on meeting the top distributors and wholesalers in the retail market. The company looks for products with strong name recognition, which reflect a commitment to quality and excellence to give away to prospective distributors at shows. They chose the BIC WideBody Message Pen with six rotating messages in addition to an imprint on the barrel. This allowed the company to communicate a significant amount of information on the pen. The company primarily handed out the pens at trade shows frequented by personnel from a distributor base dealing in retail food products. As a direct result of handing out Message Pens at trade shows, the hot sauce manufacturer added five significant distributors to their base. These additions resulted in higher sales and the acquisition of large market chains selling their product throughout the country. The company plans to continue using the Message pen as their primary give away at trade 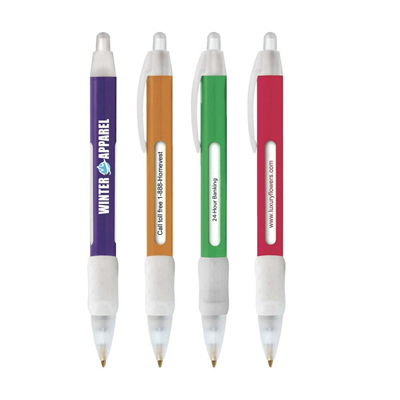